skip to main | skip to sidebar

Shabbat Shalom! This week’s Torah portion is Parashat Vayigash, in which Joseph reveals himself to his brothers. The opening verse of Genesis chapter 45 tells us that Joseph sent everyone else from the room before breaking down in tears and telling his brothers the truth. Rashi comments on this that his need for privacy in this moment is to shield his brothers from shame. Later commentators add that the shame would presumably be about the whole backstory coming out in their emotional confrontation and people knowing how awful the brothers had been to their compassionate stateman. However, Rashi doesn’t clarify himself, so it seems just as likely to me that he meant the absurdity that they do not recognize their own brother would be shameful.
Joseph and his brothers haven't seen each other in many years, and now he's in Egyptian dress, presumably with the headdress and kohl and everything, obscuring his looks. So it is fairly understandable that they do not recognize him, though he recognizes them right away. Yet, the scene calls to mind a meme I saw recently on the Facebook page Heimish Humor. 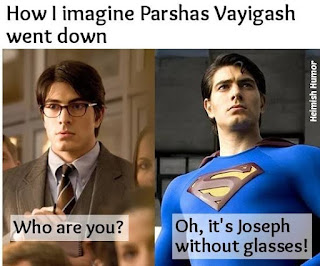 This also reminded me of teen movies where the "ugly girl" takes down her pony tail and puts in contacts and everyone is like "Whoa she's hot?!?!?!?!" While it may not rise quite to that level of incredulity that the brothers don’t recognize Joseph, it still seems yet another act of selfishness that blinds them to the truth in front of them.
Just as they were caught up in their own feelings when they were young, taking out anger that really should have been directed at their father onto their kid brother, just as they lashed out violently when they perhaps could have taken Joseph under their wing and taught him to stop being a brat, they are again now too caught up in their fear and immediate needs to truly see the man before them. It seems to me that while their concerns around the famine and taking care of who they think are their only remaining family members are extremely valid, they also could be using this supposed newfound empathy and humility that they exhibit toward Jacob and Benjamin in the aftermath of the family’s grief over Joseph to see their situations more clearly, to recognize the full humanity in everyone around them, to really see Joseph standing in their direct eye line.
It's important to take care of ourselves and prioritize certain needs over others, but we all have our moments when we get too much in our own feelings to recognize the people around us. Let's make 2020 a better year of community building by striving to look past the glasses, the pony tail, the Egyptian dress and may we all see the superheroes, the beauty, and the loving siblings that stand beside us. Amen and Shabbat Shalom.
Posted by Shulchan at 11:13 AM No comments: